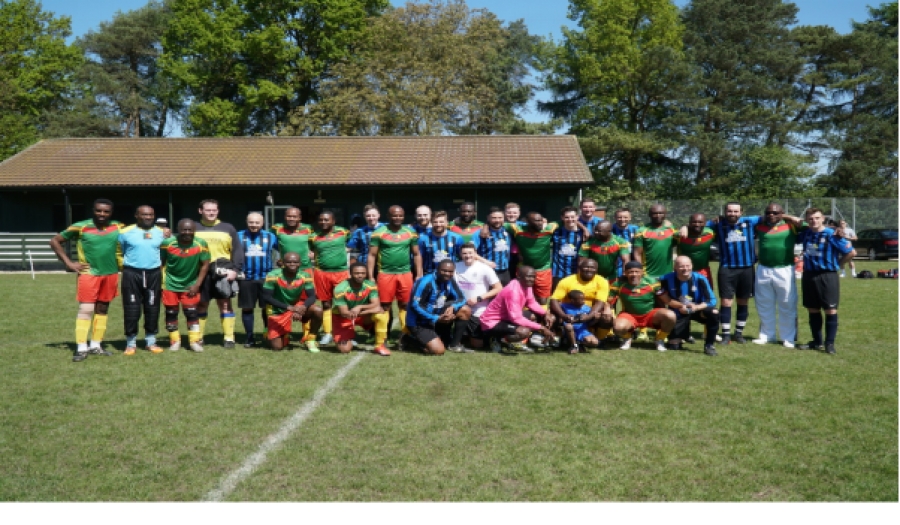 On Saturday 5th May 2018, former Indomitable Lions of Cameroon and a UK Selection took on the Cambridgeshire Police Football Team in an enthralling game of football organised by the Bisong Foundation at the Cambridge Stadium in Trumpington. The police team actually looked forward to the game and were expecting a tough one as they had to play against some of the Cameroon team who played in 1990 World Cup quarter-finals against England.

Under the theme of integration in diversity and a shared sense of belonging, Bisong Foundation chose to leverage the powerful influence of elite footballers to mobilise the community and promote personal, social and community development.

Bisong Foundation believes that football as the world’s most popular sport, can help break down barriers created by ignorance or prejudice and bring together people from different backgrounds to create, expand and strengthen social ties and network, play, watch and enjoy the game.

Bisong Foundation feels that the benefit of effective community engagement with the police can increase public perceptions of safety, a tendency towards a reduction in disorder and anti-social behaviour as well as an increase in confidence and trust between the police and the local community.

Using football to facilitate interaction between the police and community members in a non-enforcement context helps to reduce bias on the part of community members and police officers. It also helps both groups to break down personal barriers and overcome stereotypes.

When former FECAFOOT and FA referee Mr Samuel Taku gave the kick off, the game went into high pitch quite rapidly with the police team pressing on the ex-Lions back line, creating some scoring chances. One shot by the Police side bounced off the post in the early stages of the first half. However, one-time great Songo’o Jacques maintained calmness to his defensive line as the team flew through the centre of the midfield controlled by African legend Cyrille Makanaky towards the opposing goal with their pacey forwards led by Joseph Desire Job, ex-Middlesbrough FC goal getter. The first goal went to the police team through the left from a cross that deceived the entire ex-Lion’s defence including ever present Songo’o Jacques. The ex-Lions team started to find their rhythm and were quickly leveled through Desire Job.

At the start of the second half, the police team went straight at the ex-Lions as they aimed to demonstrate their physical fitness and strength. The ex-Lions came twice from behind to draw level. The game ended 3-3 after regular play time. In the penalty shootout, all-time great Cyrille Makanaky scored the decisive penalty as the ex-Lions beat the police team 5-3. The Runners Up trophy was handed to the police team by Mrs Karyne Tazi, Managing Director of the Women's Resource Centre in Wolverhampton and the Winners’ trophy was presented to Cyrille Makanaky captain of Former Indomitable Lions of Cameroon and Legends of African Football by Mrs Annette Nti, President of the Women’s Association of Hainaut, Belgium. Medals were equally awarded to children and young people by the police team.

Mrs Melanie Ngangen, Secretary of Charity Ensemble Manchester was head of delegate of children and young people who attended the event. She has been working with children to educate them about the heritage of Cameroon and was delighted to meet and interview legends of Cameroon and African football.

The police team raised £130 to support the work of Bisong Foundation.

*The author is Co-Founder of Bisong Foundation and also its Marketing Coordinator and Community Officer
Last modified on Wednesday, 16 January 2019 22:26
Tweet
back to top