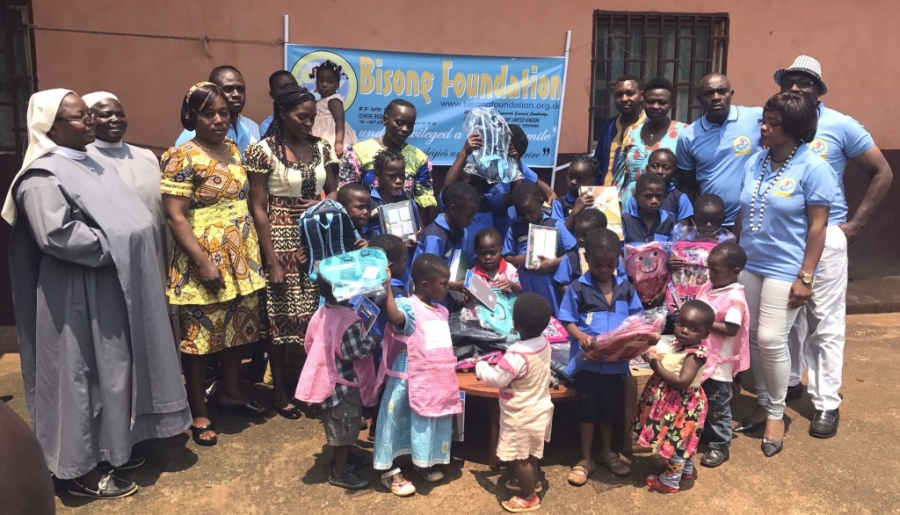 Kids of the Bon Samaritain or Good Samaritan orphanage in Babete, near Mbouda sang for joy, Friday August 18, 2017 after receiving a donation from the Bisong Foundation, a UK-based charity. The Bisong Foundation, founded in 2010 in Cambridge, United Kingdom by Michael Bisong and his wife Hortence Manto Bisong where they are both based, offered to pay school fees for all 18 school-going orphans in the 2017/2018 academic year. Seventeen of the orphans are in primary and nursery schools and one of them in secondary school.

The foundation also donated brand new uniforms for all the orphans, school needs ranging from schoolbags, exercise books, pens and pencils. Most of the kids attend the Babete Catholic School. They equally received foodstuff and other basic needs including rice, cooking oil, breakfast items and soaps.

The ceremony that took place at the orphanage centre at Babete was attended by members of the Bisong Foundation, the orphans all wearing their newly-made uniforms, officials of the orphanage and a representative of the Bamboutous Divisional Delegate for Social Affairs.

Appreciation for the gesture by Bisong Foundation, the orphans sang the French version of “If you’re happy and you know it clap your hands”. They sang many more songs expressing their joy. Equally joyed, the foundation Founder and President, Michael Bisong said, “See how beautiful the kids are in their brand-new uniforms! They are God’s children. We are realizing our dream! God has helped us, so we ought to share with the underprivileged. We won’t give them the world, we can only share the little we have.”

Explaining the foundation’s motivation for donating to the orphanage, Bisong said, “We know how important education is for, those who do not go to school will spend their lives in perpetual darkness.” He said though his foundation is concerned about the plight of all the needy, their priority was to the needs of orphans. He said the foundation is in the process of being registered in the UK.

Speaking earlier, the foundation’s Executive President, Jean-Philippe Ntoukam who manages operations in Cameroon, recalled that Mr Bisong was inspired by his own childhood experiences to create the charity.

Also speaking on behalf of the foundation, its co-founder, Mrs Bisong Hortence Manto said they were happy to see the children sing, dance and smile, which satisfies their desire as stated in the foundation’s slogan to “Give the underprivileged a reason to smile”. She said the foundation has already visited five other orphanages in Limbe and Yaounde since it was legalized in Cameroon in May 2016.

She said the orphanage was created in 2005 after a child abandoned by a mentally ill woman was brought to their care. The orphanage, now hosting 22 orphans, is run by the Benedictine Sisters of the St Benedict Monastery in Babete, an extension of the Mt Febe Monastery in Yaounde. Also speaking on behalf of the orphanage, Mme Fomekong Tikun Jeanne Sylvie, director of the centre said some of the orphans have been found to have mental illness. This left Mr and Mrs Bisong particularly concerned as it somehow falls within their professional scope. Mr Bisong is a mental health social worker in the UK where he assesses and supports adults with mental health issues and Mrs Bisong is manager of their health support agency.

Besides donating to the orphanage, Bisong Foundation blended into weeklong sporting activities of the annual get-together of the Development Committee of Bamesso village, Mrs Bisong’s village of origin, located a few minutes’ drive from Mbouda in Bamboutous Division of the West Region. The foundation’s football team featuring Michael Bisong, a former Indomitable Lions player in the junior categories in the 1990s, played a friendly match with Bamesso Veterans.

Bisong, a native of Manyemen in Nguti Subdivision, Kupe-Muanenguba Division in the South West Region, presented medals and trophies to winners and outstanding playersof the Bamesso football tournament in which Bamesso sons resident in Edea defeated those from Limbe in the final after post-match penalties. In handball, Bamesso girls based in the village beat those from Yaounde 15-6. The finals were presided by the Mbouda Subdivisional Delegate for Sports and Physical Education, Bibeme Damien Martial.

The closing ceremony of the Bamesso Cultural Week on Saturday, August 19 was chaired by Public Works Minister Emmanuel Nganou Djoumessi, elite of the village and Honorary President of the local development association.