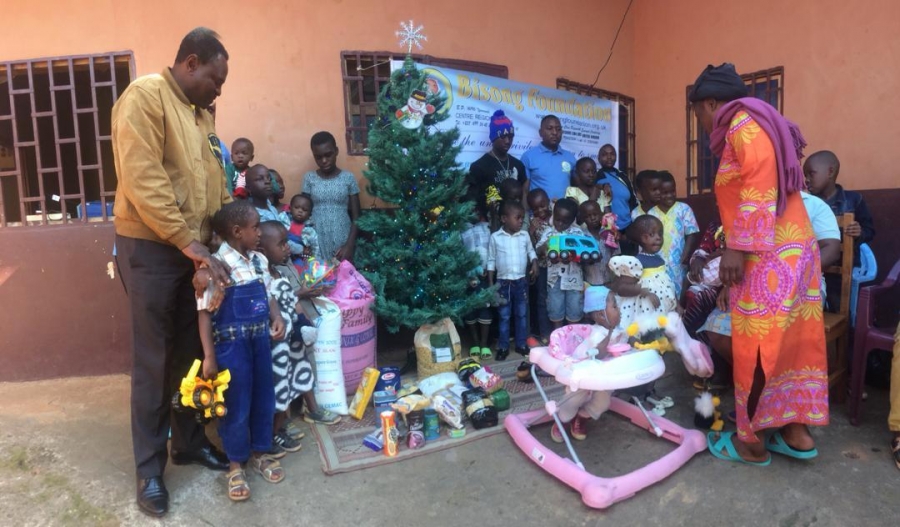 The "Bisong Foundation" was this December 23rd 2018 at the orphanage "The Good Samaritan" of the Monastery of St. Benoit Babete. The feast of the nativity served as a pretext for Bisong Foundation to continue to express its generosity towards this orphanage, through the Christmas tree ceremony.

Two interventions were on the agenda. (Putting up a Christmas tree and presenting gifts and foodstuff including health and hygiene needs). The voice of the founding couple was carried forward by Fidele KOUSSOCK and Macellin Wambo, representing the West Province. After presenting the greetings from the founding couple and the national Coordinator of BF, Fidele reiterated the commitment and social responsibilities of Bisong Foundation to the orphanage "The Good Samaritan". With support of his delegation, Fidele conveyed the message of good will from the founding couple Mr and Mrs Bisong. The director of the orphanage, in turn, expressed her gratitude to BF for this momentum which grows and renews day by day, before praying to God to bless the founding couple and all those who work for Bisong Foundation.

The children danced and sang religious songs, recalling the birth of Lord Jesus Christ. The Christmas tree was set up for the first time in the history of the orphanage and gifts of toys, scooters, health and hygiene needs and foodstuffs were given to the children and officials of the orphanage.

It was around a cocktail party that this ceremony ended. It was attended by Mr Jean Claude TATISSONG, representing the development committee of the Babete group. The officials of the orphanage expressed their extensive thanks to the founding couple and the entire team for all the financial and material donations made without which, this ceremony would not have taken place. “We pray that the Lord fills them with grace and gives them good health and strength to continue this good work”. Thanks, were also directed to the National Coordinator for his guidance and ongoing diligence. Finally, the officials extended their gratitude to the West Province team and all those who were present at Babete with a remarkable enthusiasm.

Merry Christmas and a Happy New Year 2019 to everyone!

See you all next year!