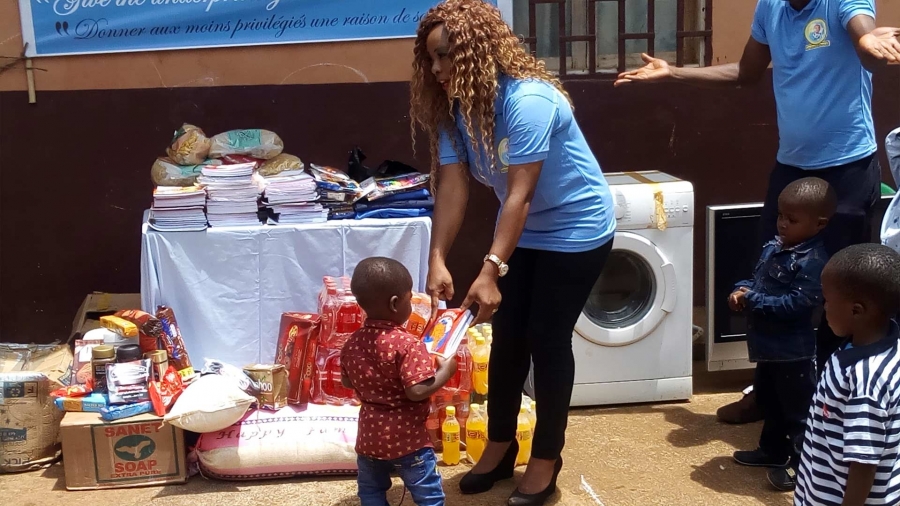 It was another day of varied emotions Thursday, August 16, 2018, for members of the Bisong Foundation when they called again at the Good Samaritan Orphanage in Babete near Mbouda, Bamboutous Division in the West Region of Cameroon like last year to commune with them and share gifts.

There was visible compassion over the plight of the underprivileged and destitute children in the orphanage run by reverend sisters of the St. Benedict Monastery in Babete, and joy over the gifts brought to them to alleviate their plight at the verge of the 2018/2019 academic year.

Like in 2017, Bisong Foundation’s gifts included school fees for all 18 orphans, school needs including books, uniforms, pens, pencils, erasers and rulers, foodstuff, health and hygiene needs and toys. In addition this year, the foundation, registered in the UK as a charity, donated a washing machine and a TV set.

Thanking Bisong Foundation for the donations, the director of the orphanage, Mrs Fomekong Tikun Jeanne Sylvie, said thanks to the foundation’s donation last year and the positive psychological effect it had on the orphans, all the children but one exceptional case, performed extremely well in school and were promoted to the next class.

The donation ceremony, witnessed by the Social Affairs delegate for Bamboutous and the president of the Babete Development Committee, was punctuated with dance and recitation performances by the orphans and kids of the Bisong Foundation.

The ceremony was preceded by a mass said by Rev. Fr. Michel of the local parish and was closed by a football match in which Bisong Foundation defeated a selection of workers of the monastery 2-1.

In other activities this season, Bisong Foundation will on Saturday, August 18, 2018 award trophies, medals and football equipment to winners of the sports tournament organized during the annual get-together of the development association of Bamesso, a village near Mbouda. The foundation’s football team will also play an exhibition football match with a selection of elite of the Bamesso village.

By Franklin Sone Bayen*
*The author is a journalist and communication consultant, and a volunteer with Bisong Foundation
Tweet
back to top